Chad Vegas, lead pastor of Sovereign Grace Church of Bakersfield, has spoken out about why he left Acts 29, a church-planting network founded by Mark Driscoll:

I knew Mark was the primary voice for Acts 29 and that I was not comfortable with how some of his comments represented the network. I also knew Mark and many of the other brothers are faithful ministers of the gospel, disagreements aside.

I remember listening in anticipation as Mark rattled off a series of affirmations. I was waiting for that moment right after the affirmations in which he would ask, “So, do you denounce modalism and prosperity teaching? Are you prepared to change your church’s doctrinal statement, disassociate from modalist organizations, and denounce any and all modalist and prosperity teaching you have participated in?” That moment never came. Instead, Mark smiled, shook Jakes’ hand, and said, “awesome.” I was stunned. I know Mark is smart enough to know that heretics will often affirm what you affirm and the real test is in whether they will deny what you deny. I wondered why Mark didn’t go there.

END_OF_DOCUMENT_TOKEN_TO_BE_REPLACED

‘The Elephant Room débutantes’ ball has seen the public emergence of pachydermism, the belief that clearly defined and defended sound doctrine is harmful to Christian unity. This lethal disease contrasts sharply with the Biblical doctrine that true unity of faith arises from a shared understanding of the objective truth taught by Scripture (cf. Ephesians 4). Pachydermism is regrettably characterized by its inability to distinguish between improper attacks upon a person, and the legitimate comparison with Scripture of what a person believes, teaches and confesses.’ — The emergence of pachydermism

Voddie Baucham, pastor of Grace Family Baptist Church, has explained why he declined to participate in the Elephant Room 2, and why he did not speak as expected at James MacDonald’s Harvest Men’s Conference.

Buacham offers a thoughtful and intelligent analysis of the problem with T.D. Jakes’ invitation to the Elephant Room, showing how it was a ‘lose-lose for evangelicalism’:

Bishop Jakes is an example of the worst the black church has to offer.

One of the goals of ER2 was to address the issue of “racial” unity. Thus, Bishop Jakes was there (at least in part) as a representative of the “black church.” In light of the aforementioned issues, I was disinclined to participate in such an event. You see, Jakes was an invited guest; an invited ‘black’ guest. If he were mistreated, he had the race card; if he was accepted, he had entree into a new audience. It was a win-win for Jakes, and a lose-lose for evangelicalism. Obviously, he was not going to spout unadulterated modalism. Nor was he going to repudiate his roots (remember, this is his “heritage,” both ethnically and theologically). He had a perfect opportunity to find a middle ground and show “humility” in an environment that would be portrayed as “hostile” even though hostility was forbidden in light of the unwritten rules surrounding his blackness. Thus, his opponents had to choose between outright defeat and pyrrhic victory.

END_OF_DOCUMENT_TOKEN_TO_BE_REPLACED

Marjoe Gortner was a child preacher who earned millions of dollars for his parents, beginning in the late 1940s. After a break from his ‘ministry’, he found himself short of money in his early twenties and so resumed preaching.

Until struck by a crisis of conscience in the late 1960s, Marjoe continued to deceive many in the church and relieve them of their money. He then allowed a documentary film crew unlimited access to his final revival tour, giving them backstage interviews where he explained how he and others deceived the flock. The video below is the resulting must-see documentary, with a startling relevance for today’s church. The film won the 1972 Academy Award for best documentary.

Of course, Christians today would never be so gullible. Would they?

Caution: this documentary contains one brief instance of crude language.

‘Modalism is considered heresy because it necessarily means that Christ did not really become incarnate. The Word did not really become flesh, and thus Jesus did not die with a real physical body, or shed His real blood. In other words, modalism necessarily invalidates the central doctrine of the entire Christian faith: that Jesus died bodily for our sins and rose from the dead.’ — May we now regard T.D. Jakes as Trinitarian and orthodox?

My thanks to Apprising Ministries for bringing this to my attention.

In a piece entitled, ‘Reformed Crowd Asked to Repent for Attacking TD Jakes’, the Christian Post reports that Elephant Room attendee, Bryan Crawford Loritts, is ‘asking the Reformed community to “repent” of their harsh criticism and one-sided attacks on Bishop T.D. Jakes in regards to his beliefs about the Godhead’.

To the adjunct professor at Crichton College, those “gospel centered” people elevated love for doctrine over love for people. His words for them were this: “Your conduct is out of step with the gospel,” referring to Apostle Paul’s words to Peter in Galatians 2 when he avoided the Gentiles only when he was around the Jews.

Loritts has apparently failed to understand that it is because we love people – including T.D. Jakes himself – that we want to be sure that they are neither inadvertently trusting in a non-Trinitarian god of their own imagination, nor being deceived by a false prosperity gospel, such as the one Jakes preaches. Loritts uncharitably judges the inward thoughts and intents of his opponents.

END_OF_DOCUMENT_TOKEN_TO_BE_REPLACED 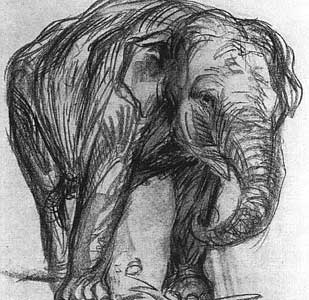 James White, director of Alpha and Omega Ministries, author of over 20 books, professor, accomplished debater and apologist, has weighed-in on the controversy concerning T.D. Jakes’ orthodoxy.

As covered by Apprising Ministries, White revealed his initial thoughts in a series of acerbic tweets: 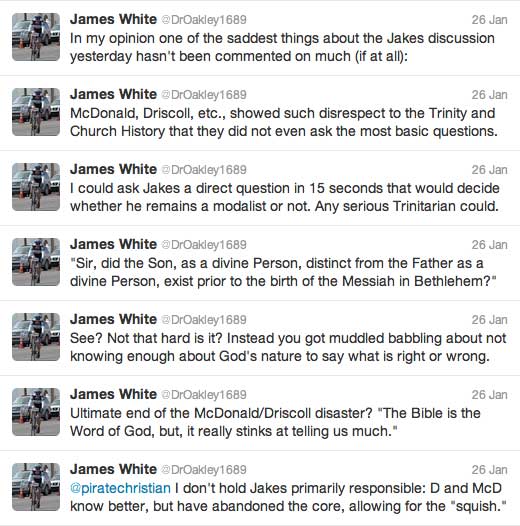 END_OF_DOCUMENT_TOKEN_TO_BE_REPLACED

James MacDonald’s invitation to T.D. Jakes to participate in The Elephant Room 2 has been nothing if not controversial, as I outlined in my previous post. MacDonald’s invitation to Jakes was no doubt well intentioned, and part of the motivation was surely to help break down the racial divide still all too evident in the visible church within the United States. Such intentions are commendable.

Why, then, was MacDonald’s invitation to T.D. Jakes controversial? For two primary reasons:

The Heresy of modalism vs. the orthodox view of the Trinity

Before we can examine Jakes’ statements at the Elephant Room, it is necessary to understand both the heresy of modalism and the Church’s historic orthodox confession of the Trinity.

END_OF_DOCUMENT_TOKEN_TO_BE_REPLACED

James MacDonald of The Elephant Room has already taken more than one hit this week, having been pushed to resign from The Gospel Coalition for being unwilling to rescind his invitation to alleged modalist T.D. Jakes.

Dan Phillips of the Pyromaniacs immediately weighed-in with his article, Even better than The Race Card™. Phillips called out MacDonald for implicitly claiming divine authority, and for MacDonald’s accusing The Gospel Coalition’s leadership of sin for disagreeing with him.

Today, MacDonald has given his critics yet more ammunition, even before his conversation with T.D. Jakes.