When an ideologue has run out of real arguments, his final desperate resort is to underhand tactics. James MacDonald, lead Elephant Room 2 agitator, has posted this video, in which the race card is again played: 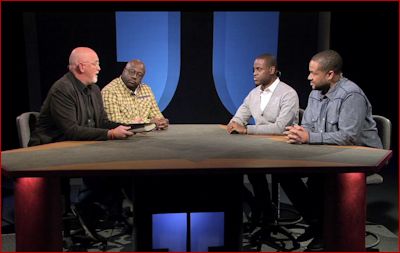 Erin Benziger of Do Not Be Surprised… gives an excellent overview:

James MacDonald interviews three African-American pastors in an attempt to ascertain their opinions on what transpired at ER2. One of these pastors was Charles Jenkins, pastor of Fellowship Missionary Baptist Church in Chicago. Jenkins is the pastor who was brought in as Voddie Baucham’s replacement at the Harvest Men’s Conference.

But perhaps the most outspoken of the three men in this video was Bryan Loritts, pastor of Fellowship Memphis Church. As you may recall, Loritts has most recently been catapulted into the spotlight for his blog post entitled, My Day With James MacDonald, T.D. Jakes and the Elephant Room. In this post, Loritts called for the reformed community to “repent” of their harsh criticism and one-sided attacks on Bishop T.D. Jakes in regard to his beliefs about the Godhead’. In response to this call to repentance, Daniel Neades of Better Than Sacrifice wrote,

Loritts has apparently failed to understand that it is because we love people – including T.D. Jakes himself – that we want to be sure that they are neither inadvertently trusting in a non-Trinitarian god of their own imagination, nor being deceived by a false prosperity gospel, such as the one Jakes preaches. Loritts uncharitably judges the inward thoughts and intents of his opponents. (Online Source)

Precisely. I couldn’t have stated it more accurately myself. Also in his blog post, however, Loritts played the ever-popular, and ever-inappropriate, “race card.” It seemed that this issue had been adequately dealt with throughout the weekend, however, and many of us hoped that it would be laid to rest. Unfortunately, in the video posted on James MacDonald’s blog, the “race card” was played again, and in a most fast and furious…and illegitimate, manner. About four minutes into the original video as it appears on MacDonald’s blog, one will hear the following dialogue between Loritts and MacDonald:

Bryan Loritts: “Some of the strongest reactions were African Americans in the blogosphere….um, I’ll just go ahead and say it, who strike me as wanting so bad to be in the white theological world. And to take a little bit of a tangent here, and I’ll get back, the loudest voices in the conservative evangelical world, in my estimation right now, are your older, white reformed voices. And so that implicitly sends the message that mature Christianity in the conservative evangelical world is ‘older white.’ And you’ve got some African Americans who so idolize that – what some people would call white idolization – that they then feel as if they’ve got to be the voice for black culture to speak against people like T.D. Jakes. So what happens is, you kind of prop them up. When the truth of the matter is, the term ‘black’ is very complex…….We’re different, we’re different. So my concern is, African Americans, a small minority speaking against Jakes, and then leveraging that in the white theological world for some of these older white theologians….”

James MacDonald: “What would they be leveraging it for?”

Bryan Loritts: “To fit into their circles….”

Bryan Loritts: “We want to be in their circles. And so we’ll allow ourselves to used as a puppet. That is my perception of some of this backlash.”

As Ken Silva noted earlier today, it indeed seems that James MacDonald is attempting to “sneak modalism in the back door” as “we’re essentially told that if we reject T.D. Jakes as a Christian brother, it’s because we’re racist” (Online Source). Yes, it certainly does seem that way, doesn’t it?

Erin goes on to cover Voddie Baucham’s dignified response to the video. She then reminds us:

Friends, this is not about race. At all. To manipulate this situation into one that is rooted in race is absolutely absurd. It seems to reveal an immature reaction to criticism of any kind and, more importantly, it demonstrates a lack of biblical conviction. This is about biblical truth. The concerns that have been raised regarding the theology of T.D. Jakes are based solely upon the fruit of his very public ministry, one that has taught not only the heresy of modalism, but also that of the Word-Faith prosperity gospel…a false gospel.

So while everyone else is getting fired up over the dangerous dealing of the “race card,” I would ask the reader to remember what is really at stake here: the Word of our God.

Phil Johnson, of the PyroManiacs blog and executive Director of John MacArthur’s Grace to You, provides his similarly forthright assessment:

…this is probably the most blatantly racist presentation I have ever witnessed from an ostensibly “mainstream” evangelical source.

The take-away message is this: If you’re an old white guy with any hint of Reformed theology in your confessional statement and you don’t think T. D. Jakes’s equivocations at Elephant Room 2 were sufficient to erase decades of concern about his Oneness leanings and his relentless proclamation of a false Prosperity Gospel—then you must be a racist. And even if you don’t think you’re a racist, you should shut up anyway. Because in the black community relationships are more important than any doctrine, including the gospel and the Trinity. We all should strive to subjugate doctrine to relationships anyway.

If on the other hand you are a young black man with Reformed convictions—or any black person who just has a keen interest in doctrinal and biblical accuracy—you are a sellout and a reproach to your own community. The only possible explanation is that you are guilty of “White Idolatry.” You secretly wish to earn favor with Whitey. You should not only shut up, you should be ashamed. As far as the importance of relationships is concerned, we don’t really care to have one with you.

So much for open dialogue and not hiding behind walls of disagreement. The Elephant Room experiment clearly wasn’t really about that in the first place. It wasn’t about real unity or truth, either.

How does 2000 years of Christian consensus on the doctrine of the Godhead get sent to the back of the bus so blithely in the name of unity and racial reconciliation?

Johnson is describing here what I earlier termed pachydermism:

‘The Elephant Room débutantes’ ball has seen the public emergence of pachydermism, the belief that clearly defined and defended sound doctrine is harmful to Christian unity. This lethal disease contrasts sharply with the Biblical doctrine that true unity of faith arises from a shared understanding of the objective truth taught by Scripture (cf. Ephesians 4). Pachydermism is regrettably characterized by its inability to distinguish between improper attacks upon a person, and the legitimate comparison with Scripture of what a person believes, teaches and confesses.’ — The emergence of pachydermism

Johnson concludes with these questions:

And why the deafening silence from so many men and ministries who supposedly are committed to standing for the defense and proclamation of core gospel truths? If you can be intimidated into silence by the race card when a greed-mongering prosperity-gospel Sabellian-sympathizer is being hailed by once-sound evangelicals as someone to be emulated, what doctrine will you defend openly and publicly?

Voddie Baucham has spoken further on Facebook about the video and the ensuing reaction to it, expressing his sadness about the division that ER2 has caused:

I see that the racial turn the ER2 discussion has taken has really struck a nerve. Providentially, as our church journeys through the book of Romans, I just addressed the issue of unity/diversity in the Body of Christ a couple of weeks ago. Rather than write anything about the recent video, I’ll leave you with this.

Less than 20% of the people in our church are “non-white.” That’s right, my family and I are in the extreme minority in our congregation. I decided over a decade ago to pursue a ministry that crossed cultural and ethnic divides. This does not make me better than black pastors with predominantly black churches (or any other ethnicity, etc.). However, it is an important piece of the puzzle in this discussion. You need to know that I am not addressing this issue (and did not listen to the video discussion posted yesterday) as one who is without knowledge of the differences between people groups/cultures.

I’ve been labeled “Uncle Tom,” and “Sellout.” I’ve been accused of abandoning the black community, hating my heritage, and trying to curry favor with whites. I’ve also experienced prejudice (both my own and that of others). However, preaching this passage was almost cathartic! I have grown to love THE CHURCH! Not the “black church” or the “white church,” but THE CHURCH! That’s what breaks my heart in all of this. At any rate, enjoy!