If you’ve been following Fighting for the Faith’s coverage of Steven Furtick’s Code Orange Revival, you’ll know that, thus far, the so-called ‘preaching’ has been an irredeemably dire exhibition of narcigetical scripture twisting. With just one exception: Matt Chandler bravely preached a decent sermon that actually pointed people away from themselves and towards Jesus Christ, the only One who shed His blood that people might be saved.

Matt Chandler’s reward for being faithful to His Lord and Master by proclaiming Law and Gospel was to have his sermon pulled from the rebroadcast of that evening’s Code Orange Revival event. Speculation abounded as to the reason for this, but Geoff Schultz – Motion Graphic Designer at Furtick’s Elevation Church – has posted on Facebook what sounds very much like an official line. Schultz writes:

The team decided to focus the rebroadcast on Jesus, so we reformatted the content a bit – We are trying to stay in the flow of what the Spirit is leading us to do. 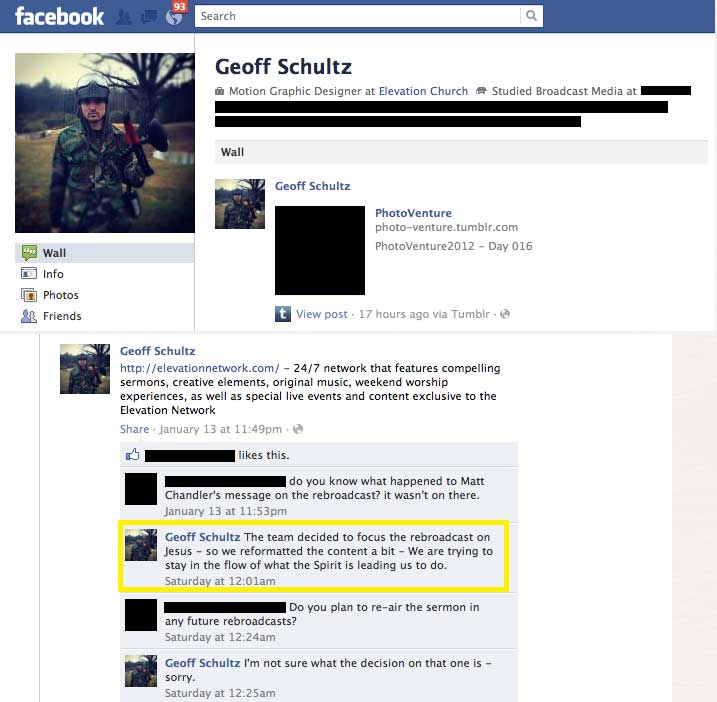 Let me translate Schultz’ explanation for you:

Steven Furtick was embarrassed by Matt Chandler’s implied criticism of his teaching. So we pulled reformatted Chandler’s sermon into non-existence, even though this meant that people wouldn’t hear about their fallen condition and be pointed towards Jesus – We are trying to stay in the flow of what a spirit is leading us to do.

For more Code Orange coverage, see Apprising Ministries, Fighting for the Faith and Do Not Be Surprised.

Under pressure, Elevation’s story has apparently shifted. The Christian Post has reported a new explanation for the cut:

Elevation’s spokesperson, Tonia Bendickson, told CP earlier, “We decided to do prayer time live during the first rebroadcast time. We were getting so many requests for prayer.”

According to her Facebook page, Bendickson is Elevation’s ‘Outreach and Communications Director’. Hers is thus as official a statement as one could hope for.

Now, it is possible that Schultz’ and Bendickson’s apparently contradictory explanations can be harmonized. Or perhaps Schultz was simply mistaken in his original post, even though he seemed to have first-hand knowledge of events. One also wonders whether, if Chandler’s good sermon had led to a great many prayer requests, why Elevation wouldn’t want to rebroadcast it immediately, for the benefit of everyone watching. Or perhaps the prayer requests were not the result of the sermon that people had just heard?

As it stands, Bendickson’s statement raises more questions than it answers. The greater story, though, will continue to be the overall content – Matt Chandler’s sermon excepted – of the teaching at the Code Orange Revival.

39 thoughts on “Code Orange Revival: To focus on Jesus, we cut the only sermon that pointed people to Him”