’Tis the season of Christmas. And that means a leaflet through our door, advertising various local church services.

What a wonderful opportunity to share Law and Gospel! What a perfect occasion to explain the significance of the birth of Christ!

First, the leaflet would say something of the Bad News: that we all have broken the commands given to us by our Creator God – that we have all failed to love Him and one another as we ought. That we have thereby rightfully earned the fierce wrath of a terrifyingly holy, pure and just God. And that we shall all surely one day stand before His throne of judgment, with no hope of reprieve from the eternal fires of hell – no hope, that is, if we are trusting in our own works, experiences or knowledge for our right standing before God.

And then, the glorious Good News: that the holy and just creator God is also a God of love. That He so loved the world that He gave even His only begotten Son – sending Him into the world in human flesh. That this God-Man was in all points tempted as we are, but lived a blameless life, perfectly obedient and pleasing to God. That this Son of God then died in the place of sinners like us, pouring out His blood and bearing in Himself the punishment of all who trust in Him, thereby appeasing the wrath of God toward them. That whoever is trusting in this Christ is declared righteous on His account, and therefore has no need to fear the coming day of judgment. That these shall not perish on that day, but instead live forever!

And, perhaps, room might even be found to mention the fact that forsaking hope in our own merits and instead trusting in Jesus Christ alone is the only means of salvation – for it is only the blood of Christ that is able to wash away our sin and make us clean in the sight of a holy and just God. Christ alone is the Way, the Truth, the Life.

The leaflet wouldn’t have to use these exact words, of course. Wouldn’t even have to go into that much detail. But, surely, the essence of Law and Gospel would be present? – The reason for the birth of this particular Baby.

And, of course, you’d expect there to be a warm and fullsome invitation, extended to everyone to come to the Christmas services and hear more about this Son of God born into the world to save sinners like us.

And it might even be that, at such a service, visitors would hear something not a million miles removed from the content of this short message:

You’d be right to expect such things.

But what came through our door was this: 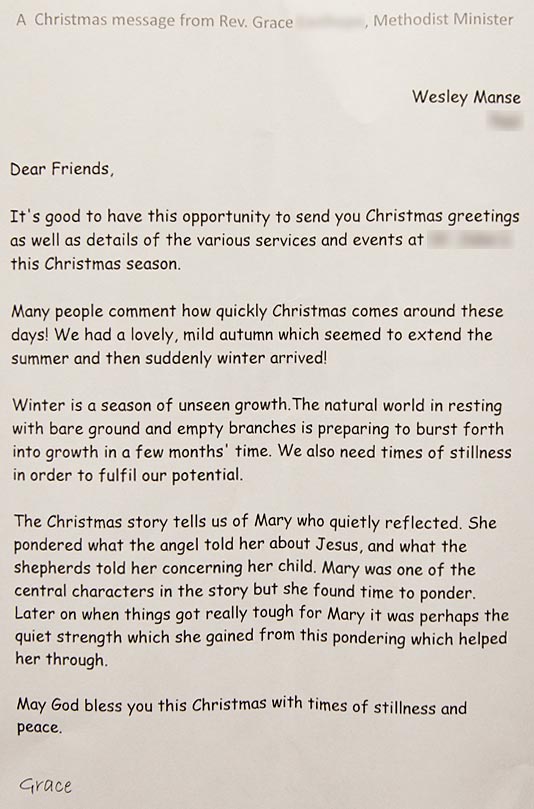 And so I ask this: if the so-called church is so utterly ashamed of the Christ and His Gospel that it has forgotten what the Good News actually is – what it is that we are saved from, who it is that saves us, and how He did so – is it any wonder that the visible church is in full-blown retreat before an advancing culture hostile to Christ?

And yet, I do not despair. For it is Christ who builds His church, and He is able to save to the utmost even we who perpetrate such acts of foolishness as this leaflet. Let us therefore repent, and turn joyfully to our Saviour, come into the world to save even such as us!

27 thoughts on “How not to share the Gospel at Christmas”